And finally it has arrived! A new model of King Song electric unicycle. KS-16X represents a completely new approach to design and a really big step forward in the technology of personal electric transport devices.

King Song accustomed us to the round shapes of its unicycles. In the case of KS16X, the device's profile has been completely redesigned. The unicycle looks much more modern, and yet the philosophy of symmetry typical of KS seems to have remained.

However, although at first glance the wheel looks quite symmetrical, in fact it is not. The front is clearly defined by the positioning of the headlight and the back by the break lights and mudguard mounting. The unicycle shell is made of durable plastic with a carbon fiber resembling finish. 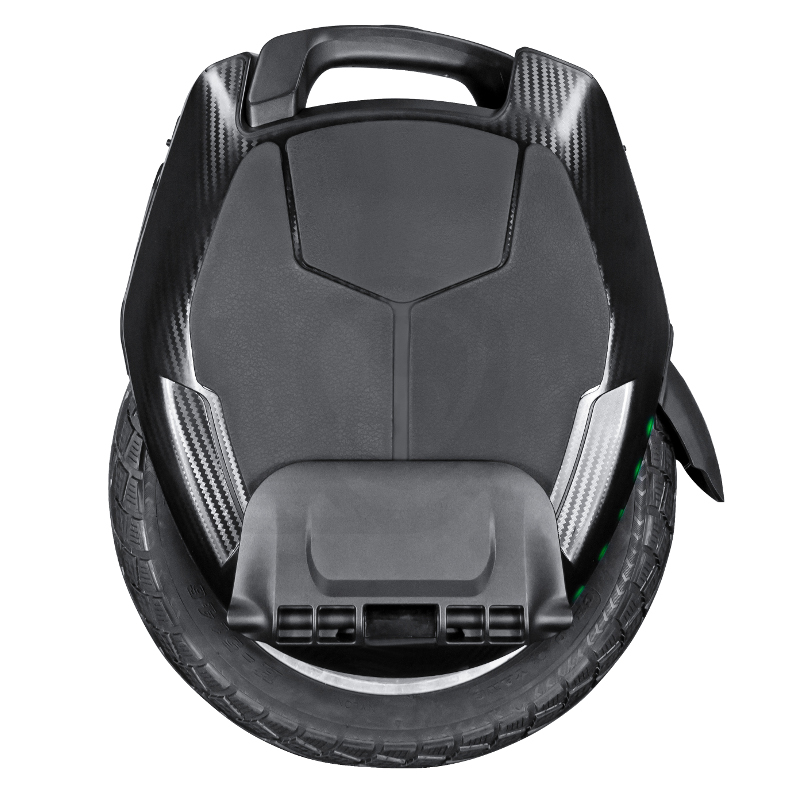 The handle is another element, which is symmetrical and typical of the brand. The diagonal mounting of the telescopic bars on both sides of the unicycle is a characteristic and patented feature of King Song wheels,

The pedals have also been redesigned compared to all the previous models. Their surface is similar to those large, rider acclaimed, foot plates on KS-18XL model. What is different, however, is the introduction of the long awaited feature that has been, for quite some time already, present on competitor models - the magnetic locking of the pedals in the parking position. 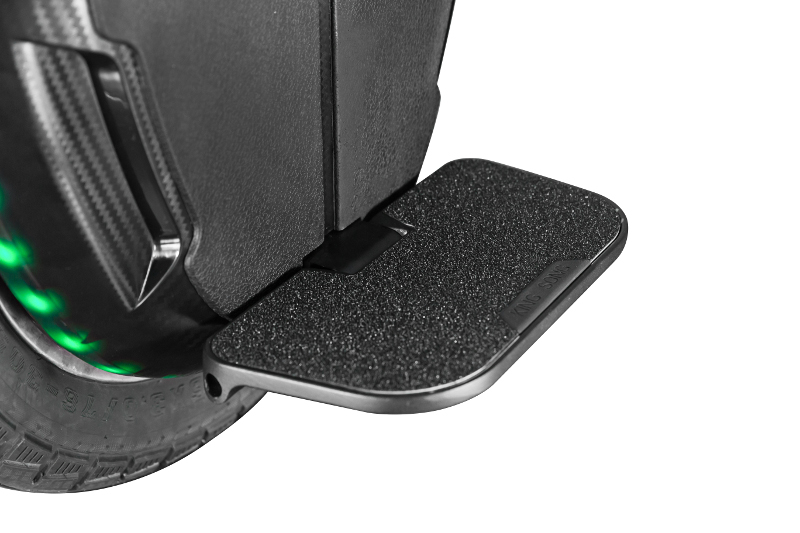 The 16 x 3.0 tire is another novelty. Increased width and height translates into a much smoother ride, surpassing even the comfort of KS18L / XL. Although the wider rim and thicker tire contribute significantly to the weight of the unicycle, Kingsong managed to keep it at reasonable 24.3 kg, exactly as much as the 18-inch KS18XL.

On the front of the housing there are two USB ports with a waterproof rubber cover. In addition to the fact that both USB ports allow you to charge small devices such as smartphones, the port on the left can also be used to play MP3 files. The built in speakers have also been upgraded offering better sound quality.

Below the USB ports you will find a super bright front LED headlight, a power on/off switch and a twilight sensor which automatically switches the lights on when it gets dark. 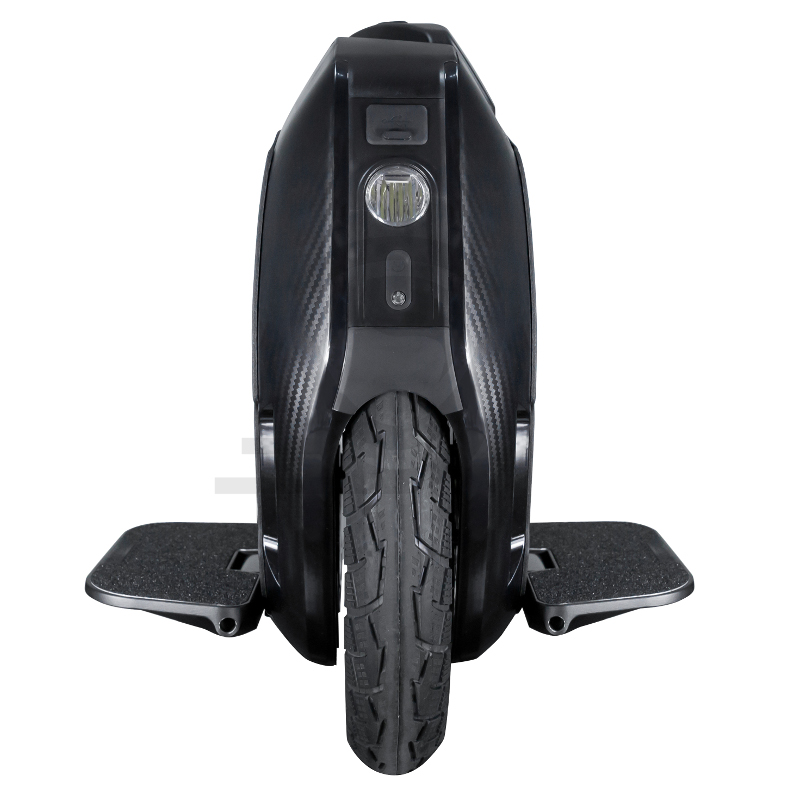 Two charging ports compatible with KS18L / XL are mounted on the back, also protected by a waterproof rubber cap. Below you will find the speaker, or rather the sound system. The rear taillights are positioned on the sides. They blink while driving and also provide a break light functionality. Unlike on the Inmotion V10F, while you break they do not blink but stay on. The large fender with reflective stripe additionally increases visibility while protecting against mud and water at the same time. 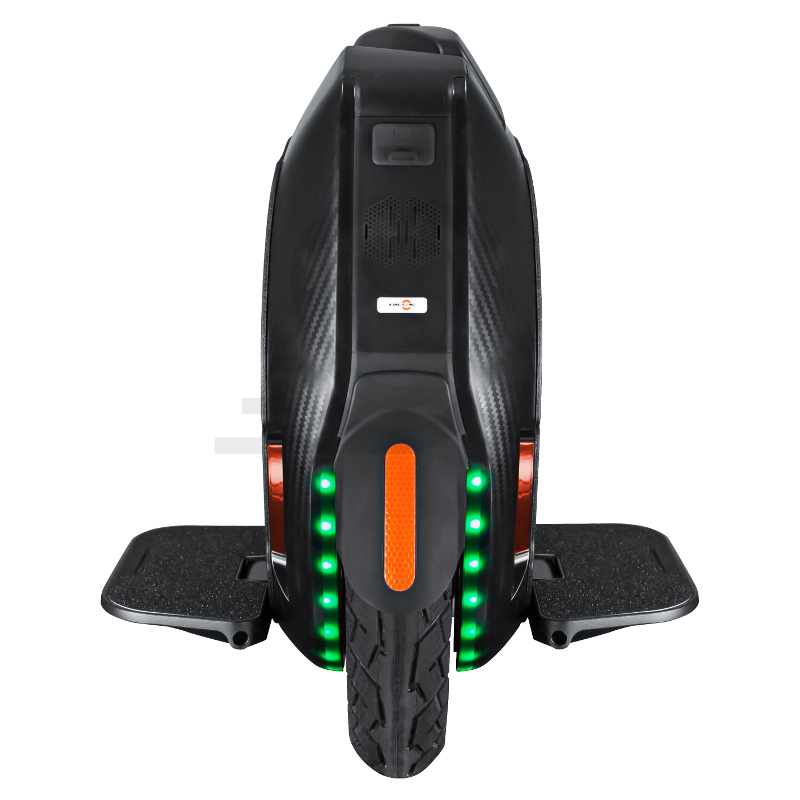 Definitely the best headlight we've ever seen. A masterpiece of Chinese engineering. It includes two independent LEDs which operate similarly to low and high beam on cars. Another feature is an option of automatic brightnes adjustment which increases the strength of the beam as you accelerate. The headlight is also constructed in such a way as to cut off the light beam at a certain height so to prevent blinding riders/drivers coming from the opposite direction. Finally, we have been equipped with something that can be called a real, full-fledged road headlight. This is definitely a big step forward in the development of electric unicycle technology.

Two vertical, symmetrically aligned on both sides, rear LED strips have been introduced by King Song on KS16X. One of the advantages of this solution is the added option that allows you to turn the tail lights into turn indicators. When changing direction only one of the LEDs enters the flashing mode.

Another amazing upgrade on this model. This time a subwoofer has been added to the configuration. It significantly boosts the base making this wheel a full-fledged Bluetooth music player.

On the sides of the unicycle LEDs go full circle around the housing resulting in an amazing lighting effect. In addition, when parked, LEDs on the side indicate the status of the battery while those located underneath provide a colourful pulse effect.

Perfectly engineered, it easily slides in and out. When extended, it can be locked in two positions depending on the user's height. It has also been equipped with a sensor that disengages the motor when you lift the device. The only sensor that works also when the handle is extended. Durable magnesium alloy handle is a very nice finishing touch.

For the first time King Song has introduced the 12 transistor solution. This allowed for more precise steering, improved engine silencing and better heat dissipation. The classic arrangement of the board above the wheel provides effective cooling to the heat sink, which, if necessary, is additionally supported by a fan.

Compared to the 2000W known from KS18L / XL engine, the magnets have been widened which allowes for generating additional 200W of power. The engine offers about 160Nm of torque which is comparable to a 1.6 petrol engine. The torque is higher at low and medium engine speeds, while slightly lower at the peak. In addition, the fact that a 16-inch wheel needs to make more revolutions than 18-inch one makes the maximum safe speed of KS16X slightly lower than KS18XL.