Almost a year ago on another website, I published my article on lithium-ion batteries. Then, I tried to introduce readers to some general information about the batteries commonly used in electric unicycles. In the following article, I would like to extend this knowledge, and also analyse practical examples of the lifecycle of lithium-ion cells usage, by owners of electric unicycles.

Lithium-Ion (Li-Ion) batteries are currently the most popular. They are widely used in consumer electronics (smartphones, tablets, etc), as well as in transport devices (cars, prams, scooters, e-bikes, etc). Their ratio of weight to obtained capacity (energy density) is impressive. 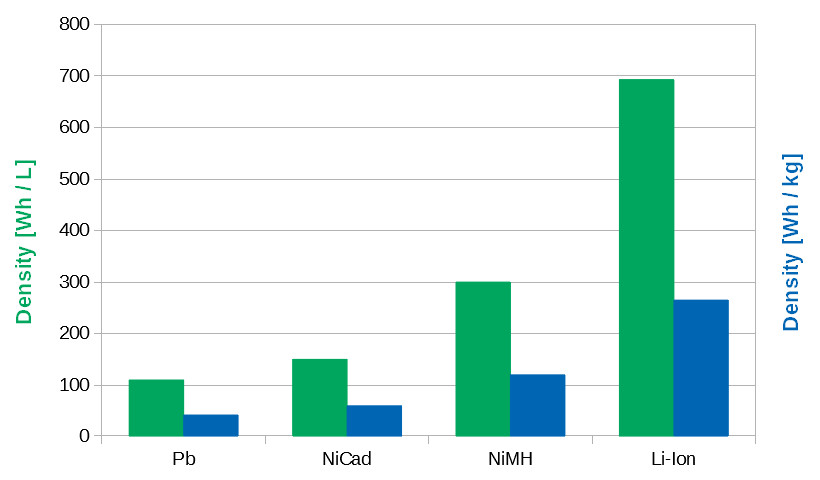 Compared to previous types of batteries, which some of us got used to, lithium-ion batteries do not have a so-called "memory effect". This means that you can charge them at any time and you can stop charging them at any time, without affecting the battery life or capacity.

The 18650 type, currently the most common batteries for electric unicycles, can be maximally charged with a current of 1C (sometimes referred to as 1lt). 1C, so-called 1 hour charge current. This means that, for example, when the cell capacity is 2500mAh, the current 1C = 2500mA. However, for standard charging, the current is assumed to be 0.5C. Taking an example of a typical King Song KS16S battery with a capacity of 840Wh, in order to determine its capacity in Ah, we must know that 16 cells, each of which has a nominal voltage of 3.6V, connected in a series, gives 16 x 3.6V = 57.6V. On that basis, we determine the capacity of 840Wh / 57.6V = 14.58Ah. This means that the 840Wh battery can be charged with a maximum current of 14.58A. The Li-Ion cells are charged to 4.2V. To be able to charge 16-cell batteries, you must have a charge voltage of 67.2V (4.2V x 16 cells = 67.2V). This implies that in order to recharge as rapidly as possible, the KS16S 840Wh should have a 67.2V x 14.58A charger = 980W. Charging will take about 1.3 hours but in theory it should last 1 hour. The actual time is longer because charging up to about 85% of the capacity takes place linearly, but the last 15% takes longer. The charging process will be discussed in more detail later in the article (section: Battery charging).
Maximum 1C charging is never healthy for batteries. The cell manufacturers recommend charging with a 0.5C current, and they use this kind of current for the tests of batteries presented in the technical documentation. It may be stated that the lower the charge current, the longer the battery life. However, you should find a compromise between battery life and readiness (the speed of charging it). As a result of the tests, data was collected, confirming that a charge current of 0.5C is ideal, called the "golden mean" in the case of Li-Ion cells. Returning to our example with the KS16S 840Wh battery, it can be deduced that it is optimally charged with 7.29A (14.58A x 0.5 = 7.29A). In this case, you must have a 67.2V x 7.29A charger = 490W. It should last about 2.5 hours. At present, King Song provides a 2A charger as standard for each unicycle. This means that the 840Wh battery is charged with 0.14C current; and from 0% to 100% the charging will last over 8 hours.
The charge current is important from the point of view of the charge time. This is quite important, but a much more important parameter is the maximum discharge current. Thanks to it, it is known how much power is available at the peak moments of using a unicycle. King Song determines the maximum power of the KS16-S at 3000W. By using a nominal battery voltage of 57.6V, it is easy to determine that the maximum current is 3000W / 57.6V = 52.1A. In this case, it is at the level of 3.6C (52.1A / 14.58A = 3.57C). In the average Li-Ion cells, the maximum discharge current is typically 2C. However, the cells used in King Song unicycles are not the average. The LGEBMJ11865 cell is a 3.5Ah cell that allows a continuous discharge current of 10A, or 2.9C (10A / 3.5A = 2.9). Considering the example of an 840Wh battery, it allows you to release a current from it of 14.58A x 2.9C = 42A. At maximum battery voltage, this gives the maximum continuous power that can be achieved at 42A x 67.2V = 2800W. Of course we should remember that we are talking about continuous power, while temporary power consumption, so-called peak, can be much higher. With this power consumption the amount of heat generated by the batteries, motor and switching transistors is difficult to dissipate. Liquid cooling is the best solution to this problem; and it is possible that sooner or later, unicycle designers will have to deal with this issue. It should be remembered that as in the case of the charge current, the higher the discharge current, the lower the battery life. Usually the average power consumption of the King Song KS-16S unicycle is about 400W. It means power consumption at an average level of 400W and current 400W / 57.6V = 6.9A, or around 0.48C. For lithium-ion cells this is a virtually negligible current, taking into account that LG performs life tests using currents of 3C and 5C in the discharge cycles.

Most producers determine battery life on 300 charge and discharge cycles. As a rule, charging is carried out with the current considered as standard (at a level of 0.5C), and likewise with a 0.5C current discharge. After the 301st charge cycle, a discharge occurs, during which detailed measurements are made to determine the energy that was recovered from the cell. On average, cells lose about 20 - 30% capacity. Here again, the LGEBMJ11865 cells continue to amaze. According to the documentation, after 300 cycles of charging over 1C (4A) and discharging in the order of 5C (15A), the capacity drops by 20%, and after 500 cycles to 77% of the initial capacity, or 33%. Of course, these working parameters are well above the average, so realistically a 20% decrease in capacity appears only after a minimum of 500 cycles.
In addition to charge and discharge currents, there are still several factors that significantly affect the battery life. The most commonly taken into account are: operating temperature/storage, depth of discharge (DoD) and the level to which the cells are charged (SoC - state of charge).
The influence of temperature is obvious and, if possible, it is recommended to store and use Li-Ion batteries in the temperature range 0 - 35 °C. Lower temperatures do not reduce the service life but affect the obtained capacity, while higher ones permanently decrease the life of the cells.
The depth of discharge (DoD) has a huge impact on the life of lithium-ion cells.

Discharging the batteries only by about 20%, it can be said that scarcely after 5 charges we are at stage 1 of full charging from 0 to 100%. 9000 / 5 = 1800 full cycles. This proves that the lower the depth of discharge, the longer the lifespan, but it is also difficult to use batteries to consume only 20% of their nominal capacity. In practice, without any problem you can fluctuate around 50% to almost double the lifespan. For example, travelling 30km a day on a KS16S with an 840Wh battery and connecting it to the charger, we work on a two-fold increase in service life.
The charge level of the cells is a very important factor affecting the lifespan of lithium-ion batteries. The tests show that it really pays off to charge cells up to 80 - 85%. This avoids the last phase of charging the battery that has a negative effect on the electrolyte contained inside the cell.

Research proves that charging lithium-ion batteries to 85% prolongs their lifespan up to 3 times compared to charging the same batteries to 100%.

ATTENTION: To balance the cells of the battery it is important to charge up to 100% from time to time.

Charging lithium-ion cells takes place in two phases. The first, the longest phase, is charging with a constant current (CC). This phase is characterized by a linear increase of capacity relative to voltage and charge time. The first charging phase ends, depending on the cell model, around 80 - 90% of the battery charge. The second, final, loading stage is charging with a constant voltage (CV). This phase initially gives a large increase in stored energy, then slows down, and the final around 5% lasts for a very long time. 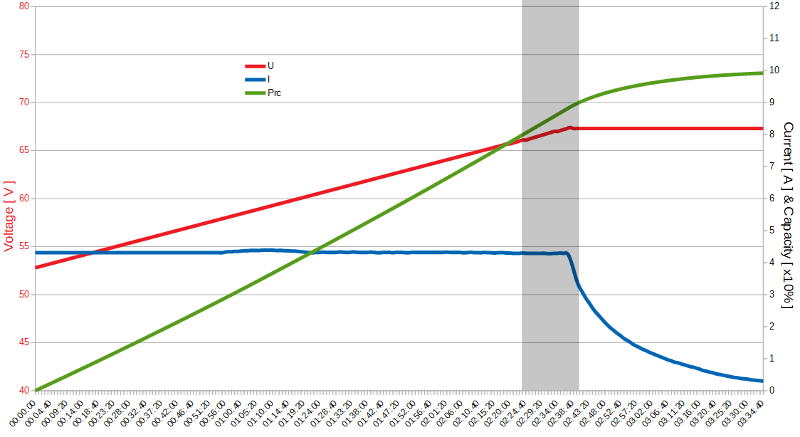 The moment when the charge is between 80 - 90% is marked in grey. In this interval it is recommended to terminate the charging in order to significantly extend the life of the batteries.

Longer battery life is not the only reason to limit charging to 80 - 85%. Not everyone is aware that when the electric unicycle is in the braking phase, most of the power from the electric motor, which has to go somewhere, is transferred to the battery. During braking, the battery acts as a resistor, to which all the energy to be diverted from the motor is directed. Some of it is recovered and a part is wasted in the form of heat. This is because the unicycle battery can accept 1C current. In our example, the KS16S 840Wh, this is a current of approximately 14.58A, i.e. a power of 14.58A x 57.6V = 840W. With soft braking most can be recovered, but with more sudden braking not necessarily. The power that is generated when braking, is similar to the power needed to accelerate at the same pace. When a battery is full, because there is no where for braking energy to go, braking may not achieve the desired effect. In the best case scenario, maybe it ends with jumps on the motor windings (sensations similar to ABS in the car), while in the worst case you cannot brake get into an accident.

A standard charger, is the simplest, allowing the unicycle to be charged within a reasonable timeframe. However, it is difficult to talk about a reasonable timeframe when a 1680Wh battery can take up to 13h. In order to stop charging at 80 - 85%, it is necessary to calculate this moment in time according to the calculation based on the charger's power and the initial depth of discharge of the battery. Of course, keeping an eye on it and manually disconnecting it is quite tedious.
A more practical solution is to use smart load monitoring systems that can end the charge at a previously defined point. One option is to use the popular Charge Doctor. But the Charge Doctor does not address the issue of charge rate. To address both issues (charge rate and programmed charge cut off) we have built a modern, fast (300W) charger with a built-in, charge monitoring system. Our charger allows you to program the end of charge in the range of 80 - 100%. Read here for more information:

If you need to store your unicycle for an extended period, it is worth knowing what conditions will minimize the decrease in battery capacity.

The table above shows the results of tests regarding the storage of lithium-ion batteries. From these data it can be deduced that it is best to charge the battery to approximately 40% at 0 - 25 °C. These results do not indicate permanent battery consumption, but only about the loss of energy during storage. However, it can be presumed that in proportion to the loss of energy, there is a small, permanent loss of the cells' capacity.

How to Prolong Lithium-based Batteries